Buzz is a typical con-artist. He often tries to scam people out of their money, mainly Woody and his friends. He is very sneaky, sleazy, and sly.

In other appearances, Buzz has been a cowboy, a carnival barker, a soda jerk yet he still remained a royal pain to Woody. For most of Woody’s career, Buzz was the primary foil for Woody, bearing roughly the same relationship to that character as Yosemite Sam had to Bugs Bunny in Warner Brothers' animated shorts from the same era.

Buzz is an anthropomorphic cartoon buzzard. He is black, had a yellow beak, wears white gloves, and green pants. In other cartoons, he was gray, wore a sweater, and a bowler hat. He has red ireses in the modern series and merchandise, but in the classic series, he has no irises. Sometimes, he had a buzz-cut.

Buzz first appeared in the Woody Woodpecker show where he appears from time to time to swindle Woody out of money or food. Some of the cartoons ended with him dying however.

Buzz's first appearance was opposite Woody in 1948's Wet Blanket Policy, the first and only animated short subject to be nominated for the Academy Award for Best Song,[2] at which time he was more or less replacing Wally Walrus as Woody Woodpecker's primary foil. Character actor Lionel Stander provided his voice in the 1940s with Dallas McKennon taking over the role in the 1950s. Buzz would continue to appear in Woody Woodpecker shorts until the mid 50’s, and was eventually replaced as the woodpecker's rival himself by Dapper Denver Dooley (also voiced by McKennon) and later Gabby Gator. Bunco Busters would be Buzz Buzzard's final appearance in a Woody theatrical cartoon until Tumble Weed Greed in 1969. Though Buzz continued to make appearances in Lantz comic books and on other licensed merchandise.

In Real Gone Woody, he and Woody are college students and they compete to take Winnie Woodpecker to the school dance. They try to get one another away from Winnie. However, at the end they both lose to another bird.

While most episodes would have Buzz lose and Woody win, sometimes they both lose, such as in the cartoon mentioned above.

Buzz also appears in the New Woody Woodpecker Show where is voiced by Mark Hamill of the Star Wars franchise. While Buzz would usually appear alone, he'd sometimes by assisted by his much abused assistant, Tweaky (also voiced by Mark Hamill). Other than Woody, he'd also scam Winnie, Knothead, and Splinter out of their money as well. Buzz and Tweaky would rarely be seen interacting with other Woody Woodpecker characters. 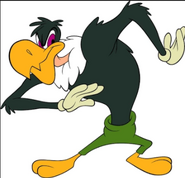 Add a photo to this gallery
Retrieved from "https://woodywoodpecker.fandom.com/wiki/Buzz_Buzzard?oldid=9160"
Community content is available under CC-BY-SA unless otherwise noted.